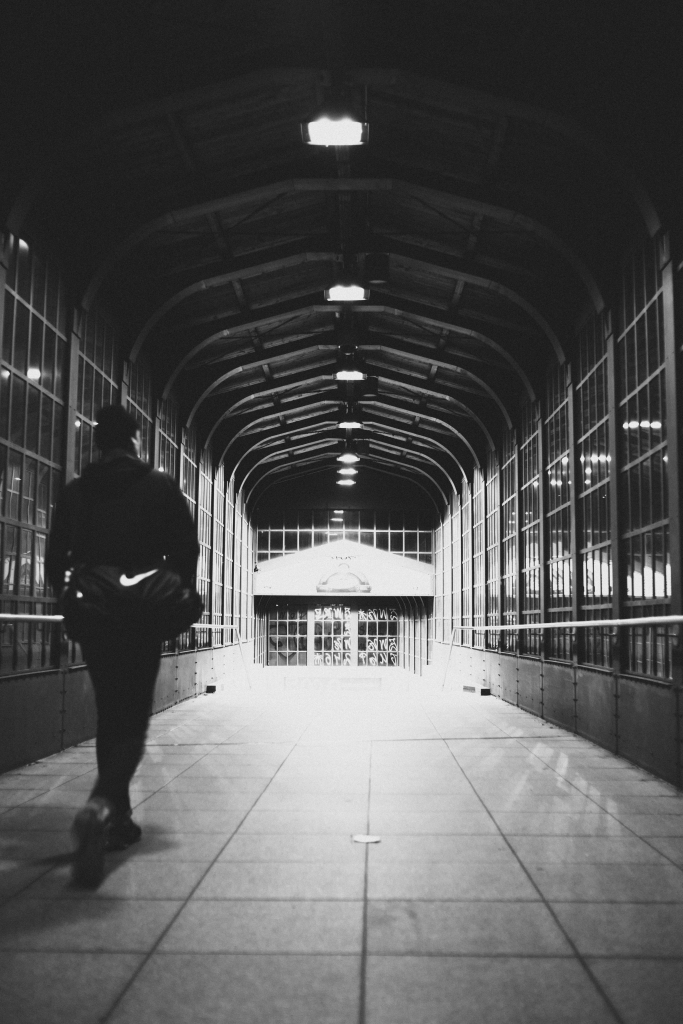 When I have to stay overnight in Berlin, I usually stay in a very nice hotel close to “Bahnhof Friedrichstraße” train station. I was always fascinated by the architecture and the maze of underpasses and small alleys in that station. It’s extremely confusing. But normally you rush through a train station, you don’t have time to take photographs – or better: you don’t take your time to make them. This time, I was so amazed by the light in the small overpass that crosses Friedrichstraße and connects to the U-Bahn station that I quickly checked into the hotel and went back with my camera and took a few photographs and then edited them right away on my iPad during dinner with Lightroom Mobile. I increasingly like the ability to work on the photographs right away – when they are still fresh in your memory.

Later on today I was then reading a bit about the history of “Bahnhof Friedrichstraße”. I knew a little bit about it, that it was one of the train stations that basically got cut in half and truncated East and West Berlin after the Berlin Wall was built in August 1961. I also faintly remembered that it was one of the biggest gateways for East German Stasi (East German State Police) spies to get into West Berlin. In September 1967 alone 1,700 of those spies crossed the border at Bahnhof Friedrichstraße. That’s a couple dozen per day. One of the reasons why the train station was so heavily frequented was because it was extremely hard to oversee and observe. So it was not only used by Eastern spies but also by Western RAF terrorists to get more or less undiscovered to their Stasi contacts in East Berlin.

When you wander through the train station today you can still see and appreciate why it was such a great place for the Cold War spy business – even I get still lost here sometimes. 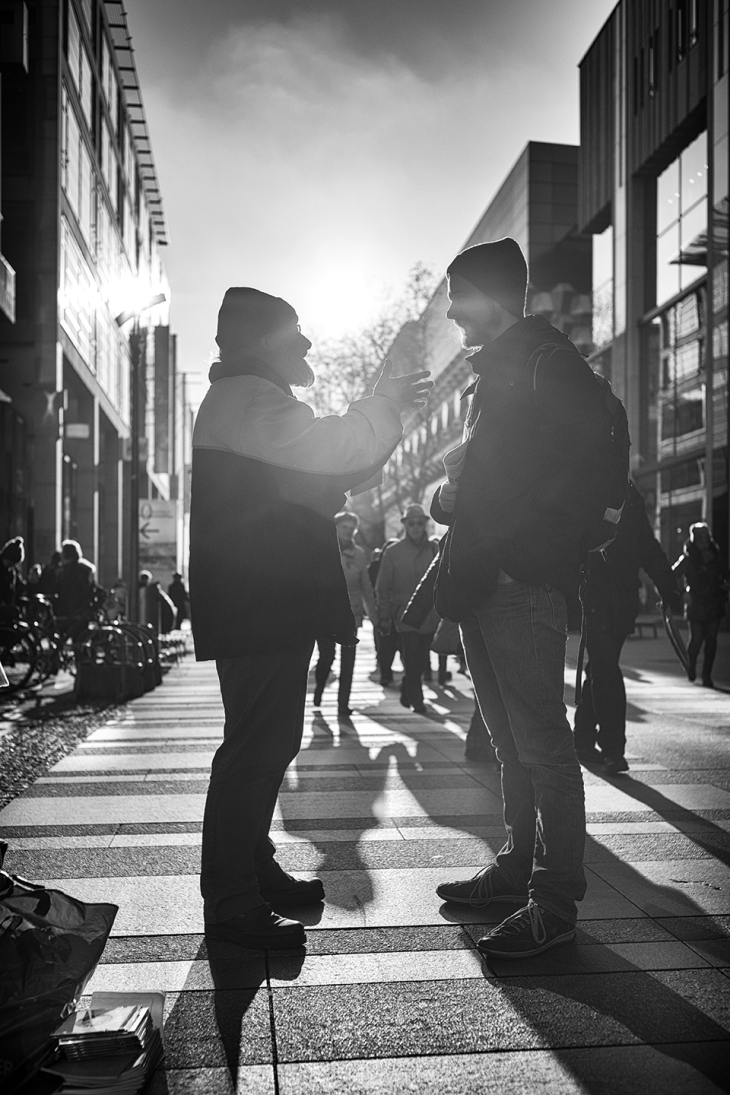 The Dresdeners among us know the guy on the left by heart. He is standing in the middle of the busiest pedestrian street in Dresden every day and is promoting his “movement” or “party” or simply his views of life. He seems to be a very smart person, very kind and – I believe – just loves to talk to people. He is not bothering anyone, but whoever he catches he can talk to forever. So beware, you have been warned :).

When it comes to photography and museums I typically find myself more interested in the visitors than the actual exhibition. It’s a bit exaggerated I admit, however, from a photographic standpoint there is nothing less interesting than photographing other people’s artwork. So even at the Getty I found myself taking more pictures of people than art.

As I mentioned in my previous post the architecture of The Getty is at least as interesting as the exhibitions themselves. Just strolling through the vast gardens and terraces was a pleasure on its own. 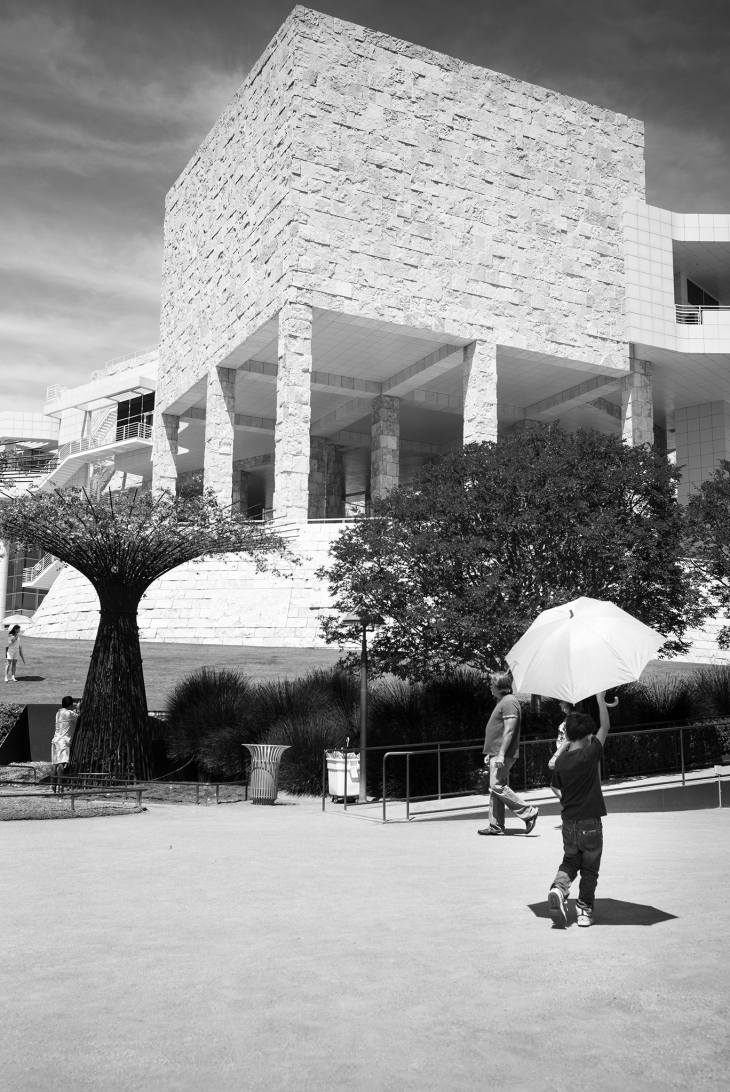 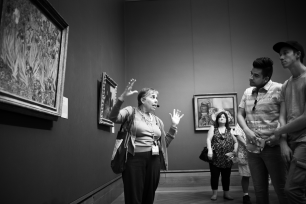 No one can visit LA without seeing the Getty Center up on a hill in the Northwest of LA. Admittance to the museum itself is free, only if you arrive by car you pay for parking which is really fair. The architecture is stunning and has served as a futuristic backdrop for many movies. One of the latest was “Star Trek Into Darkness” where it featured Starfleet Headquarters.

I spent almost five hours there, and still wasn’t even remotely able to see everything. The site is huge and has a wide variety of contemporary and classic exhibitions on display. Because of that overwhelming breadth of exhibitions I decided to get on a guided tour which took about two hours and gave a great overview. I then digged a bit deeper in some of the exhibitions on my own which proved to be quite a good compromise.

I particularly enjoyed the tour through the Robert Mapplethorpe special exhibition. I think it’s save to say that he is one of my favorite photographers. Extremely controversial yet blessed with an incredibly strong sense for how pictures can trigger the viewer’s senses – from a content perspective but also lighting and composition.

Over the next days I will be posting more pictures of The Getty Center. So make sure you check back regularly (or subscribe).

Another one of those tips I got from a friend who lives in LA: Canter’s Deli. Supposedly the best Deli in town, and although I can’t attest to that since I did not try any other Deli while in LA, what I can say is that the look and feel is very authentic 50s/60s Deli-style, but more importantly the burgers were just outstandingly good. Oh, and I do not recall ever having had a stronger Margarita than in that place. I believe it only consisted of Tequila. I doubt there was anything else in it to be honest. Fortunately, Uber took care of my ride home :). 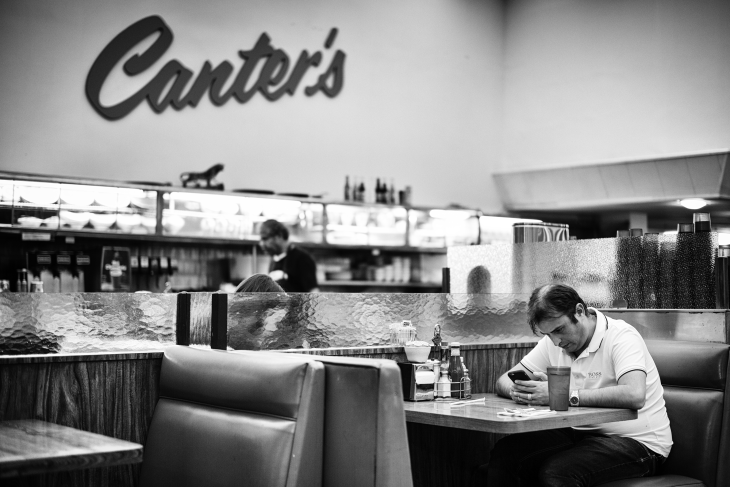 I’m a big Sushi fan. So on my quest for a good restaurant during my stay in Los Angeles a friend recommended the Nobu in Malibu which is a few miles up North on the Pacific Coast Highway (PCH). It sounded really promising because it would neatly combine a good dinner and a scenic drive along the ocean. And not too much he promised. The restaurant itself is nestled on top of the rocky shore and has a splendid view over the ocean. But that gets topped by probably the best Sushi I have ever had. And if that wasn’t enough I also got a taste of for sure the best Sake in my life.

But the food and drinks wouldn’t be as good without proper presentation and company. So I got a seat at the Sushi bar, and coincidentally a really nice couple was sitting right next to me. So not only I got a great view on the Sushi chef preparing my and other’s sushi plates but also enjoyed a great conversation. What more can you ask for?

The only thing that was missing, really, was that I didn’t bump into Robert de Niro or who ever else the celebrities are who allegedly own the restaurant :).