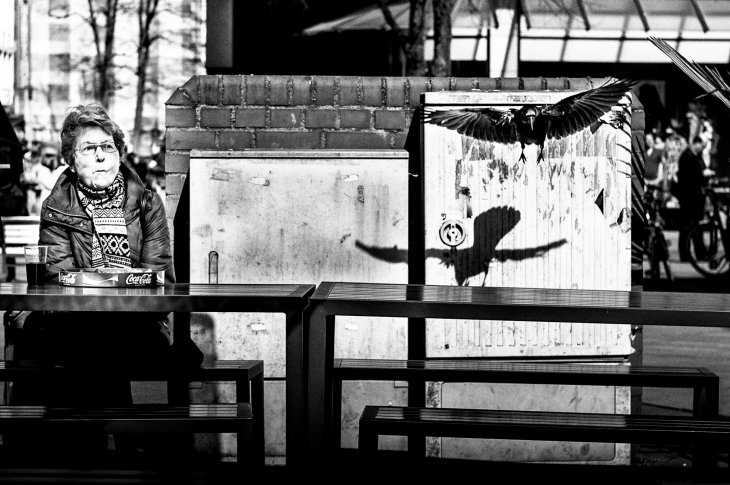 When I discuss photography with some of my friend-photographers it always amazes me how well others can create an image even before they shoot it. Yes, they also go out on the occasional street hunt, but their typical photo exists in their minds even before they stage, enact and finally photograph it. The act of taking the photo is a mere transposition of what they had already visualized mentally.

I’m the almost complete antagonist to that approach. I’m trying to capture what life itself has already staged in its indefinite entropy for me, which removes the process of “creating” an image almost entirely, and reduces it to this mere act of capturing that moment in time. So yes, you can call me lazy, since I’m relying on a greater power to create my photos for me.

Do I feel bad about it? No, not at all! For one because from time to time even I try and stage a photo (see the feature image on the top of this post), but more importantly as long as I’m not that trigger-happy photographer who takes 200 photos a day and then by pure luck has created one photo that might actually work, I consider the act of finding an interesting subject, an unconventional perspective and a bit of a story that my image is going to tell, an act of creativity. You could even go as far as saying that finding that decisive moment on the street is far more difficult than staging it. But I won’t since I believe that both approaches have their merits and everybody has to decide for him- or herself what appeals more to their way of being creative.

The only advice that I would have and that I’m trying to follow myself is to think out of the box and step outside your used paths of how you usually take photos from time to time and do something different so you won’t get stuck in a routine and thereby limiting your creativity. I do need to force myself to do that with the help of the earlier mentioned friend-photographers and actually think up a photo beforehand, get all the necessary props and scout the location and then do the shoot together, but you may have other avenues you can take.