I was toying with the idea for a while to upgrade my Leica M Monochrom based on the M9 and its CCD sensor (henceforth I shall call it MM9) to the just released new Leica M Monochrom (Typ 246/M246) that is based on the newer Leica M-P and sports a CMOS sensor. There is much said about the differences between the two sensor types, so I won’t repeat them all, but I believe there is a lot of merit to both technologies. And in all truth if Leica wouldn’t have made me an undeniable offer to swap my MM9 for the new M246 then I would have probably stayed with the MM9. There was really very little I would have to complain about the MM9. So we part ways with one or two tears in my eye :).

The new M246 feels like a modern camera and much less like a “classic” like the MM9 did. It’s still very hefty and solid. But it’s also snappier, quicker and much more silent (the strange shutter noise of the MM9 was one of the complaints I had). The LCD display on the back can finally be used to assess the image you have just taken. The small low-res screen on the MM9 that seemed to be a left-over from another century was good for navigating the menus, but forget about using it for telling whether an image was a hit or miss – in particular if you nailed the focus or not. Before using Live View and only reading about it I would have never thought I would find it useful. Mainly because I’m a real fan of the rangefinder. But if you want to shoot from a different perspective (i.e. from the ground or high up) you can’t focus with the rangefinder unless you are a contortionist. Live View really comes in handy here. The focus peaking is not only a nice to have, but when using LV it’s a must. Otherwise it would be very hard to determine focus on the LCD. In addition with Live View you can use all sorts of wide-angle or tele lenses (and from the R-series) that would otherwise require an additional rangefinder module specifically for that lens. That said, that is not a concern for me since I only use a 35 and 50mm lens on my Leicas (for now).

But the most important part is certainly image quality. It’s very hard to top the image quality of the “old” MM9. Its way of rendering is very unique. Almost film-like. That’s what made the initial “Monochrom” so special and that is the reason why I loved it so much. So I was somewhat hesitant if the new M246 would really deliver a better image quality. I haven’t used the M246 enough to be able to make a final judgement, but what I can say is that the images look different. In particular the highlights seem to have a very nice “glow” that gives the image a certain “aura”. It’s very hard to describe, but it’s something special. Where the MM9 was prone to blow the highlights and you in general would have to use exposure compensation by minus 1/3 stop the new M246 isn’t blowing the highlights at all but keeps a nice structure in it. Which is I believe one of the hardest things to achieve for a digital sensor since the tonal difference in the highlights is so minute that both hardware and software need to be very sophisticated to keep them as separate tones.

But pictures tell more than thousand words. So here is one of the first images I took with the new “Monochrom” on a trip to Berlin at Leipzig Hbf (Central Station). Please note that the image is processed in Lightroom CC 2015 and Silver Efex Pro with the Tri-X preset. So the “grain” you see is not from the M246 itself but added in post. I will for sure continue to post my experiences with my new “Monokuro”.

Make sure you click the image to see the full-res version. 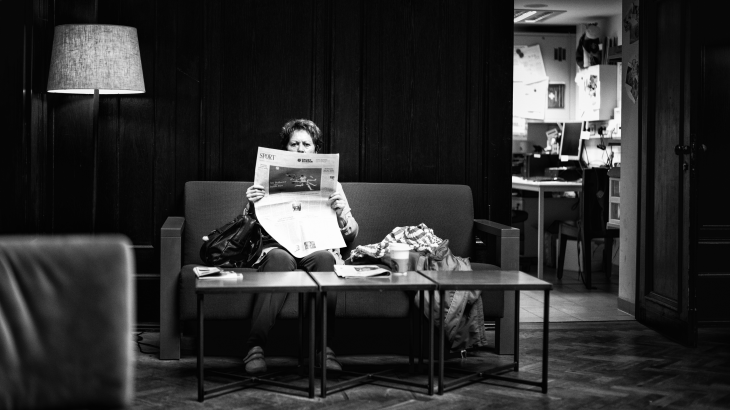 Update (6/26/15): For a comparison of the actual image quality with the “old” MM9 I have posted a completely unedited version of the above photo below (again, click to enlarge to see a full-res version).

Luckily Whit Monday is a bank holiday in Germany and luck we had with the weather too. So we decided to go for a short but intense hike into the “Elbsandsteingebirge” or “Sächsische Schweiz”. For me personally it was quite some time ago that I went out there, which is a shame considering it is so close to Dresden and the landscape is plain beautiful.

It was more by accident that yesterday I stumbled upon an old photograph of a condemned building that used to be a service point for trains, cars and other rail vehicles. I took it at a time when I was really into photographing old, abandoned, condemned houses. That was in 1997, in other words 18 years ago…

This series I shot in Black and White film, a Fuji Neopan 400 Professional. Looking at these old photographs and toying around with them a bit in Lightroom 6 I quickly became fascinated again by the character of the old film images and the latitude the scanned negatives still provided when using modern photo editing tools.

So I decided to re-scan and re-touch some of them using my Nikon Scanner LS 40 ED (aka Coolscan IV ED), Silverfast 8 and Lightroom 6.

And so here you go. Enjoy watching them as much as I enjoyed taking, excavating and bringing them back to “light” again :). 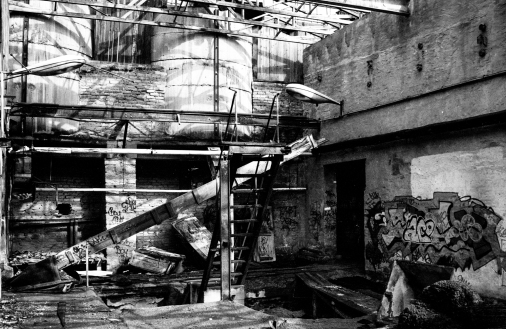 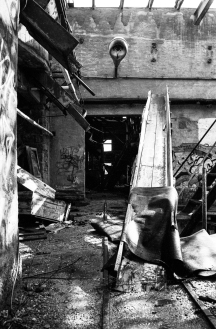 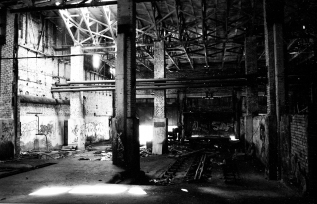 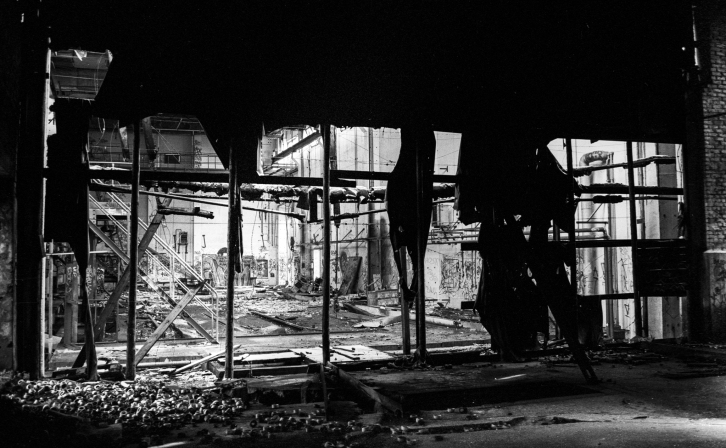 I was strolling through Leipzig with friends recently and was astounded that many buildings have never been renovated or refurbished after the peaceful revolution in 1989. In the area we were passing through most houses just continued to rot as they did before the wall came down. And many of the shops were abandoned. In fact the one on top was really closed, the one down below, the “Hinz und Kunz” apparently is still open.

As with many things there is no black and white story here since for many affordable apartments are an issue in growing cities like Leipzig (or Dresden or Berlin) in former East-Germany. As pleasing as it may be for our eyes and taste to see nicely renovated apartment buildings, they come at a cost: people of lower income have to move out of their quarters they perhaps have grown up in and will now have to move into other parts of the city that are considerably cheaper. Mostly these are satellite suburbs which now collect all the low income people which leads to an unhealthy homogeneity let alone that many old people you just shouldn’t move at all since they will never really find new roots again.

“Klangteppich” is a local band from Dresden which happened to have a gig at the same TV show where writer Willi Hetze was interviewed. So I took the occasion and tried capturing some of their performance as well. It’s a pity that I couldn’t capture the music though :).

Accompanying the rise of a star is kind of fun – you get dragged to premiers and interviews – all that glamorous stuff us normals usually get spared. And so it happened last week that young author Willi Hetze whom I had already reported about gave a TV interview to a local Dresden TV station about his new and upcoming short-story book “Das Unbegreifliche der Katzenwege”, Taschenbuch, 190 Seiten, Verlag zwiebook, Deutsch, € 12,90

The backdrop of the interview was sort of fun too: a small fast-food kiosk/pub “Curry & Co.”. And no, that is no Indian place… they serve “Currywurst” (a sausage with hot, spicy sauce) in all kinds of flavours.

But ’nuff said, enjoy the pictures :). 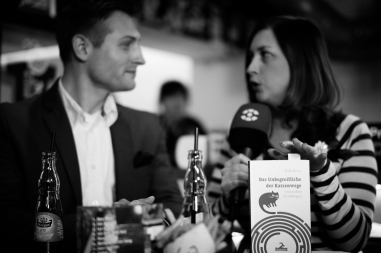 When Adobe released its new version of Lightroom – Lightroom 6 and Lightroom CC – I was a bit underwhelmed by the new feature set that came with it. The only interesting bits that I could make out were the new filter brush and an enhanced performance when you use a discrete graphics card and have a 4k hi-res monitor.

Of course I couldn’t hold back long in trying the new version myself and really find out for myself whether the upgrade is worth it or not. Luckily Adobe provides a trial version which I swiftly downloaded. After a bit of playing around I decided to let you know the results of my very initial test including a quick demo of the filter brush tool. And here you go:

Today Adobe announced Lightroom 6 – the next major upgrade to its photo editing software.

Besides new features there is an even more important change: Adobe moves Lightroom into its Creative Cloud (CC). Fortunately Lightroom 6 is still available as a separate purchase option if you are not fond of Adobe’s subscription model (me included). The CC version which also includes Photoshop CC sets you back 9.99 USD (plus tax) in the US or 11.89 Euro in Germany (incl. VAT) per month. The standalone version (no subscription) is 149 USD (plus tax) and 129.71 Euro (incl. VAT) respectively.

The question it begs: Is it worth the upgrade? END_OF_DOCUMENT_TOKEN_TO_BE_REPLACED

When I was a little kid we had a stone elephant on the playground in our neighbourhood in Dresden. I don’t know how many hours I spent with my play-buddies on and in that creature, hiding out in its small nests or simply using it as what it really was: a slide :). That was 30-ish years ago…

Last week I was strolling through a park (Palmengarten) in Leipzig with friends – and I couldn’t believe it when I saw the exact same slide again as if it had been forgotten to dismantle. In Dresden they are all gone as far as I can tell, but the City of Leipzig seemed to be keen to keep that gem from my childhood. Kudos to Leipzig :). 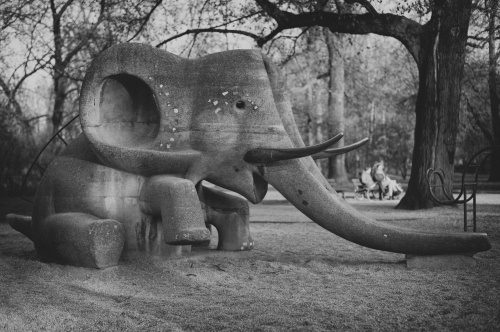 One way of speeding up your workflow in Lightroom and making it more efficient is to use keyboard shortcuts instead of moving around with your mouse.

In this tutorial I go through the most commonly used shortcuts and explain how and in which context they work best.

Enjoy watching and please let me know if it’s helpful and more importantly where I have made mistakes and what I can further improve.